A Week of Weather Changes

Friday it was so lovely and warm in Perth city, so much so that we were way too hot in our Firey gear when collecting for the annual street appeal for all the bushfire brigades.

Andrew had to strip down to his sexy red braces! 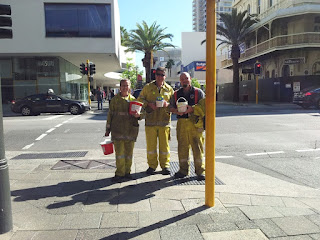 That's my sister, Jen and my Bro-in-Law too. There were 16 of us from our brigade out on the day, which is great because the takings get divided equally per person/hours. Jen might have had the best donation of the day; a hundred dollar bill from one feller who she said was covered in tattoos.  As they say, you should never judge a book by its cover!

Charles from our brigade was there for his 20th street appeal.  What can you say about that kind of dedication, except three cheers for Charles! 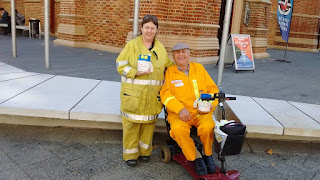 Saturday, just to be totally different, was stormy and wild. A good day for resting by the potbelly after Fireys and reading a good book, complete with Labradors of course. 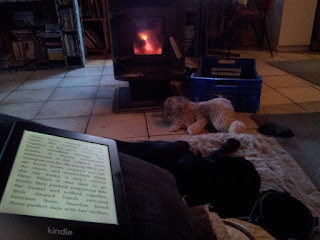 The book is called "The Apple Orchard," by Susan Wiggs.  Andyroo put me onto it. It's a sweet read.

The girls are loving the fire. You can see Rosie's matching shaved patches on her front legs from having her drip in.  So far so good, though we had to put her back on her cortisone and cross fingers her tum handles it. She really is just too itchy to do without it.  We'll see how she goes now she is fully transferred over to the crocodile and tapioca roll we are getting her.  Geez, we eat way cheaper than she currently is!  :) 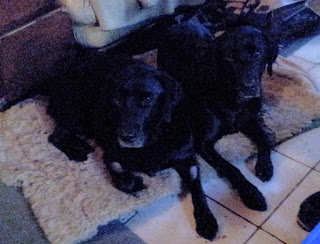 I know that's a bit of a dark photo but at least no demon eyes from the flash.  :) Tuppy is bad for it, I think because she is constantly so adrenalised that her pupils are huge.

This was an odd weather phenomenon we saw this week. 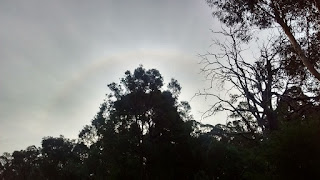 At least all the rain has brought back some green grass as last!  Woo hoo! 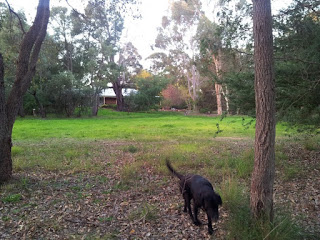 Every year these trees take more nutrient from the paddock and the grassed area gets a bit less, but it doesn't matter any more, because we all do is mow it anyway, now there are no horses.

It's the season for baking too. This almond flour, pear and apple tart with rice-milk custard was part of Andyroo's birthday prezzie this year.  :) 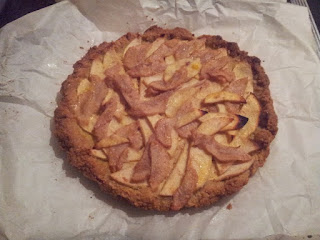 The crust recipe comes from Elana's kitchen.  It's a bit rich for me but he loves it.  :)

I also finished these gold wrist warmers for him a day late.  He liked the look of mine so much he wanted a pair too! 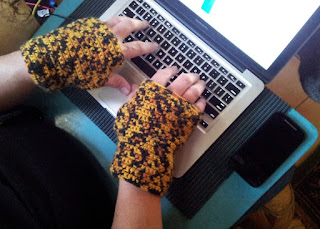 We have another storm forecast for tonight and early Tuesday  morning.  Fingers crossed all our trees have their toes down nice and deep...