I'm not sure I deserve the love of this very large and devotedly snuggly cat. 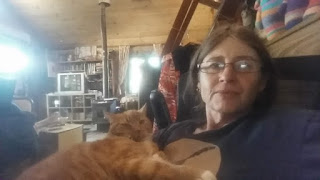 Being the special person of a special animal is a privilege, but also a heavy burden at times.

This is Spotty.  This time last year she was raising a clutch of Wyandotte chicks for me. 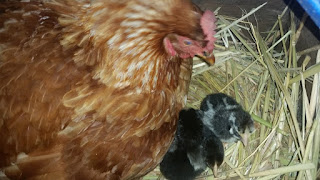 She is the only one of my three red chooks who survived a recent fox attack.  The fox got away with nothing, because it broke the necks of my other two red girls, then tried to drag Spotty away, but my dogs scared it off. (Go Rosie and Tuppy!)

It's one of those events that a chicken owner hopes they never experience.  It was my own fault. I'd dragged a slab out from under the gate in my recent renovations and hadn't put it back, and mr or mrs fox dug under the gate.

I had to put down the two hens, my dear tamest Rover, and Fido the talker. In my nightshirt and bare feet within minutes in Fido's case, but in the morning for poor Rover, who I'd thought the fox had taken and only found the next morning, hiding under a piece of tin.

A lot of chicken owners hate foxes, but I never have. They are doing what they need to do, and it is up to me to make it so that they can't do it here.  After this event, we now have electric fencing to top up our defences.   Cheap hobby?  Ha!

Anyway, it could have been much worse if it wasn't for the dogs, and because both my Wyandotte hens (Spotty's babies from last year) were safely tucked away in their own broody hutches elsewhere.

Guinevere was safely with her one baby, an obvious rooster right from hatching, who is called Frankendotte, or Frank, because his mama was a red hen and his daddy was Elvis the rooster (who was being an ass and is now in a better place).  Frank is actually growing up to be quite pretty in a bit of a muddled way. 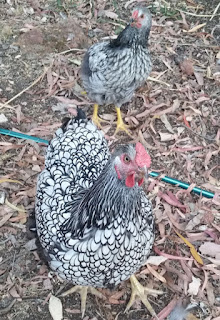 Since his daddy grew up to be a dickhead, maybe Frank will too, and in that case he will be off to rooster heaven as well, to a place where all the hens sit down even if you don't bother to dance for them or be nice to them (or to your owner's mother).

Morgana was safely sitting on eggs on the night of the fox, and she too only managed to hatch one chick. The word is that the weather has been too weird this spring.  Her chick looks like a girl (praise be!) and I think is from the single, solitary egg laid by by my old, old, Black Australorp, Nanny Ogg, this whole year.  She is black, with a tiny tipping of white on the wing feathers, but at only two weeks you can't tell yet.  Morgana and her baby stayed safely in a borrowed rabbit hutch until this week, and are now in my new broody hen pen.  Can you call a girl chicken Mordred?  If so, that is her name, or maybe even if you can't.  Has to be, really.

Old Nanny was right in the back corner and survived, as did bloody Elvis. What happened to putting his life on the line for his girls?

My other survivors were that trio of ratbags, known as Blue, Powder and Puff, the Sussexes.  Blue is supposed to be a hen but is blatantly not at this point.

The two coronation girls are a delight, so silly and soft.  I'm very glad they were safely in the broody pen at the time. 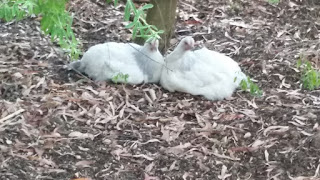 So, Spotty was saved by the dogs, left behind by the fox, dazed and bleeding, when she wouldn't fit under the gate. She was injured on the face and neck and I thought she might not make it, but a little rest and care saw her begin to perk up.   Now she is back to true ferocious red chook form, and the other day she went weird on me and did this quite a few times in a row.


I think it was because I moved Morgana and Mordred to the new pen, but who knows with chickens, for the ways of chickens are strange!

In other news... wait, is there anything to life but chickens?  Surely not!

Not really, it only seems that way some days. All is lovely in the world of the merry bard.  Good friends and laughter, making music, work of the hands and mind, my Druidry to keep me grounded and floating at the same time, and some long-dreamed-of events coming up to enjoy in 2019.  Weeeee!

I hope you have lovely year, with no literal OR metaphorical fox attacks upon your life.   May 2019 bring you all that is for your greatest good and happiness, whatever that may be.   Blessed be!