Some weeks test us, don't they.  It's been a week like that for us.

Monday night, our sweet Rosie kept us up with nausea and restlessness.  We zipped her into the vet first thing Tuesday morning.  We'd have been even quicker, but she'd had a beef knuckle bone the day before and we assumed she'd done what she's done before and swallowed a piece that was too big and was trying to get it back out the front way.  When things hadn't resolved by dawn we knew that if it was a bone piece she was going to need help, so off we went to the vet.   Pancreatitis was in the back of my mind too, after losing Tam to it.

Turns out it was neither, but instead a thing the vet called haemorrhagic gastroenteritis.  We'd seen no blood from either end, but once admitted she showed did throw some up and some was on the thermometer and her temp was high too.  Oh oh!

Poor baby, she's been so sick! 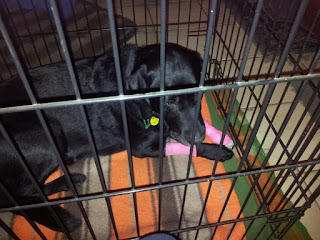 She was admitted for tests and given fluids and all the good meds to help her feel better.  She came home each night so we could watch her, but went back for three days of hospitalisation to keep her fluids up and to get her meds via IV rather than her poor digestive tract.  Yesterday she came home for good, hopefully!

Many thanks to all of our friends over the world who sent Rosie healing thoughts, Reiki, prayers and white light.  You're the best!  The vet said she was thrilled with Rosie's progress.

Rosie's not so enthused by her current diet of small meals of canned vet food. Too bad, Rosie, that's all you get for a whole week so there's point in hopefully looking into the fridge at every opportunity.  That tummy has to heal! 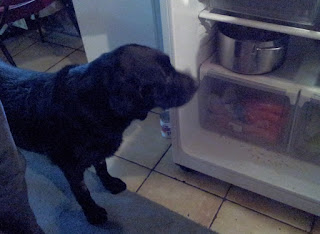 Of course she was a darling for the vets and they loved her. It is so helpful when your dog is ok with strangers.  The days of Buffy were much less easy to manage, requiring that I generally be there all the time to manage the front end!

The vet specifically mentioned how helpful it when a dog is crate trained.  They don't get panicky when confined due to needing the drip, they know it is quiet time and settle right down.  Rosie has barely been into a crate since her puppy days, but she remembers and was very good at both the vets and at home where we set up the crate to keep her quiet, since she had brought the drip home with her to be continued overnight.  It's worth crate training your dogs, it really is!

So, we've had some very sleepless, worrying nights, which of course makes for clumsy, distracted people during the day and then all sorts of other silly accidents happen.  The sort of things that just make you sigh and feel like it is suddenly all too hard.  Ah well, we've weathered the lot and hopefully things will get back to normal now!

Tuppence coped alright without her beloved mama, but when we parked at the grocery store to get food supplies and left her in the car alone, she yelled so much that someone called the police!  We had to explain ourselves when we got back to the car and show them that she is in scintillating health.  I do appreciate that someone is watching out for dogs, but really, it was a lovely cool day and we were parked in the shade with the windows down a little.  She was in no danger.  This whole 'saving dogs in cars' thing has got silly!

I didn't bother telling the police that Tuppence is prone to yelling almost that bad even when Rosie is in the car, because she is just a Very Excitable Dog and she thinks we'll take them for a walk after going shopping, even if we've just had one.  :)

Ah well just another thing to add to the major and minor stresses of the week.  Some good stuff happened too.

I kept writing no matter what (it's as good a way to use up the spiraling thoughts as any other) and hit the 20 000 word mark early, on Wednesday.   It's flowing well, now.  I scared myself today with one of the, shall we say, more chaotic of the characters.  Hee.  Love it when that happens.  :)

On Sunday, Andyroo and I finished the archive shelves upstairs in the Fire Station.  Woohoo!  It was a big job and required some silly celebratory photos. 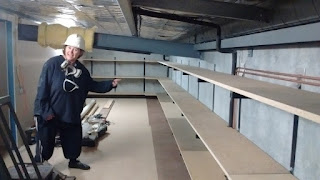 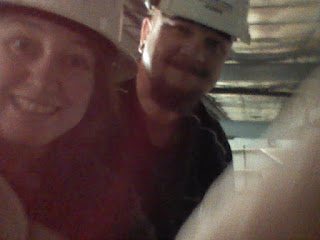 In the low space, hard hats were a necessity, even for short-arse me!

We've almost finished the east fence of the chook pen.  We put in the buried wire today to stop foxes (and Labradors after scraps) from digging in. Next is to add a last row of shorter wire mesh along the top.  We're basically using up what we already had, to be economical, but it's a little low. 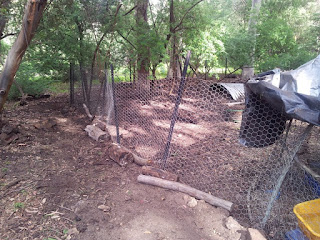 It looks a bit skanky too, but when there is so much rock under the ground, you get the pickets in wherever and however you can.  We had a tractor in to drill holes on the other side when we re-did it, but this side isn't accessible.


Luckily our chooks aren't flyers, but a GSP who was visiting went right over the old fence and killed one of our chooks a while back, so we do need to raise the height a bit.  I should think a fox would make short work of the fence too, but we luckily don't seem prone to fox attacks here.  Sometimes I think it's the chooks' door into the chook dome that keeps foxes away at night.  It's a weld-mesh trap door that drops down and has to be stepped on to enter, and I reckon they think it is a live trap.


Niamh did more work on her acrylic canvas this week. I probably should have taken sis's offer up to call it off for this week what with Rosie and all, but I figured it was better to keep busy.  I was very drained afterward, though.  Teaching is not my calling, shall we say?


Still, she did a lovely job. 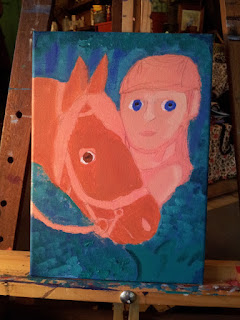 Lots more work to do yet with Ollie's face and her clothes and helmet, but I'm very pleased with the way she got into the spirit of texturing and experimenting in the woodsy background.

We went for a lovely walk at Noble Falls on Monday evening. (Probably where Rosie ate whatever made her sick).  Tuppy stayed out of trouble because she was on her long lead.  After this week, Rosie might be back on lead too! 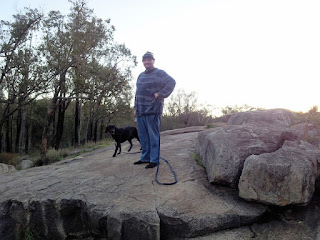 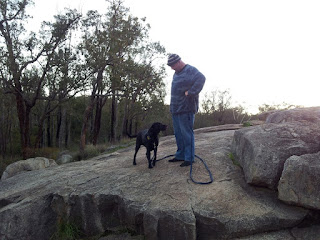 Rosie and I taking the above photos of Andrew and Tuppy. Ah the mobile phone age.  :D 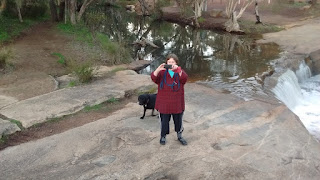 Even more lovely was this jar of pickled apples and ginger that I made from our own kefir whey. Yum!  I can't show you the recipe because I basically found a few recipes online for apples and one for ginger beer and combined them.  :) 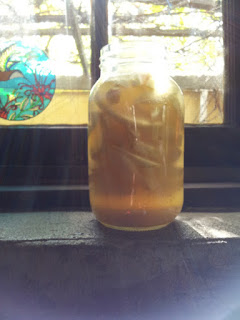 The result is delicious; sweet, tingly, gingery and appley, perfect with vanilla yoghurt, as we ate them, or with icecream too if we had any.  :)


I hope for you all a peaceful weekend with no unexpected visits to vets!