At last the weather is turning towards coolness.   Things are going on as normal around here, though I am just getting over a crappy cold of snotness.

The chookies are having a nice life as usual. Guinevere went broody again, and since none of her fertile eggs survived the heat while she was sitting, I bought her four day olds. Three Silver-spangled Hamburgs and one white Cochin, which were what the local stockfeeder had hatching that day. I like Cochins, but I think Hamburgs might be a bit flighty for me, so we'll see how they go.

At any rate Guinevere is happy, though she only has three now because one chick died two days after arriving. It was a very hot day. I gave them an ice bottle but Guinevere isn't the smartest chook and she didn't take them over to it.  She's a sweet mama, though. 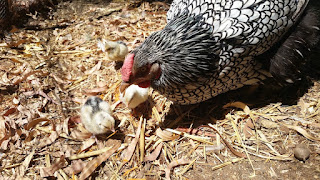 Morgana and her singleton child Mordred are still hanging out together.  Luckily she hasn't gone back to broody again!  Mordred is quite pretty, a cross of Silver-laced Wyandotte and black Australorp, and a hen thank goodness! 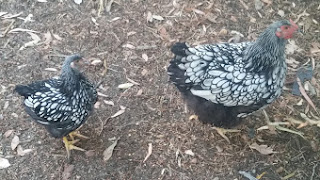 As usual, the dogs and cat are hard at work. 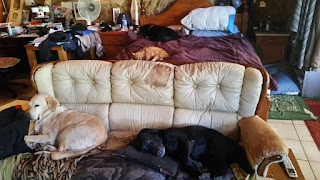 You can see these two are related!  :D 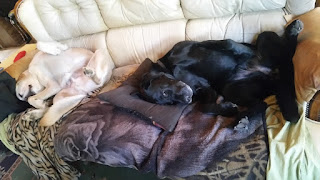 I've been playing lyre and guitar pretty much every day (till I got sick).  I'm getting a few songs up to scratch ready to join in Bardic circles when we go over to South Australia for Damh the Bard and Cerri's concerts and camp. Weeeee!

We bought a caravan and have been getting it set up to drive across the Nullabor. We've never done it, and it seems like something every Aussie should do once, so we're going to do it.  It's a Jayco penguin camper.  I really like Jaycos and it is the thing we looked at that didn't smell of outgassing plastics.

The biggest hassle has been trying to remove all the left over perfumes in it.  We've had to buy new foam to put in the mattress and kitchen seats because the one that was in them had some hideous chemical in it to keep it fresh.  Bleagh.  What a toxic world we are creating. The new foam is European standard and has no chemical outgassing or perfumes in it.  Thank goodness!  This chemical sensitivity drives me nuts.

Not that i had far to go to get there, as the next photo shows. 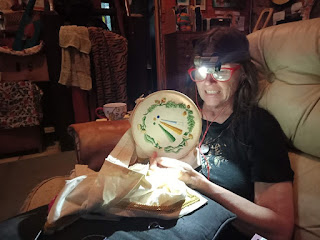 That's me embroidering my design on my ceremonial tabard.  Jarrah leaves and blossom one side, oak leaves and acorns the other, and the Awen in the middle with the colours of blue for Bard, Goldy-brown for Druid and Green for Ovate.  i love it now it's done but I will not be taking up embroidery for a hobby!  Head torch, 2.5 times glasses, and still I tired my eyeballs out. 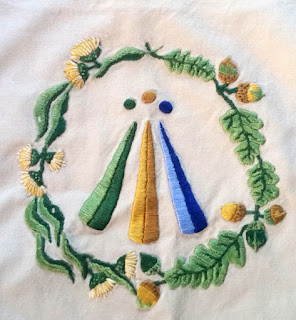 Kitty liked to help me. Help me not embroider! 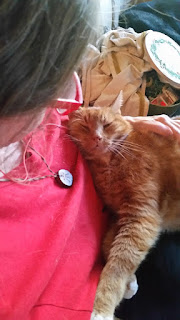 Other current projects include a t-shirt design for the Druids of WA group.  We put out the call for anyone in the group to design a shirt, and i figure someone else will make a more serious one, so I let myself be as twee as i wanted, and this is the result.  Now being watercoloured. 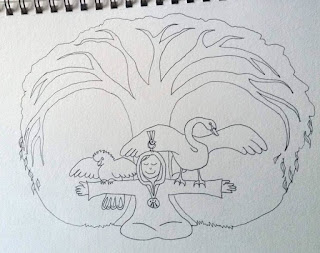 We had a fun games night here not long before I got the snots. This pic came just before Thor crashed the Jenga pile.  We'd already played three games of Forbidden Desert by then and died every time. Apparently the five player version is very hard to win, so we didn't feel too bad. 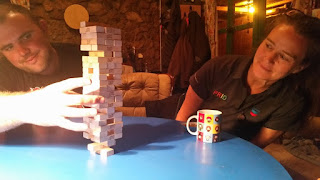 I'll leave you with these pics of a creepy place I found when walking a local reserve I'd found in the street directory.  Turned out it was a whole big old granite quarry area, now abandoned, and it was one of those really weird moments to come upon it all out there when I'd expected just ordinary bush.

It had very odd energy and i found myself Druidly blessing the torn up land, and blessing the restless spirits of those who had laboured here, perhaps the convicts who built the railway lines in the area.

This was the deep and black lagoon I came across.  A hole cut while chasing the dark granite into the ground, and now full of black water even so late in a dry summer.  It reminded me of nothing so much as the pool at the gates of Moria.  Brrr!   Didn't even dip a toe! 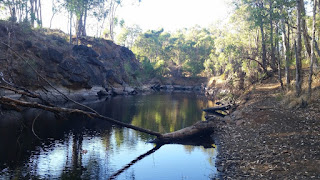 Well, you hope not but it does.  Some recent firey pics. 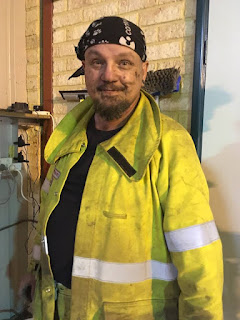 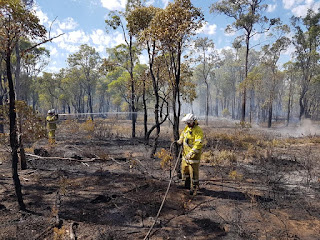 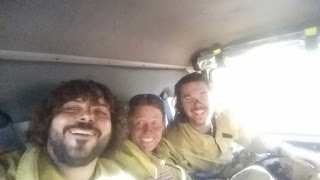 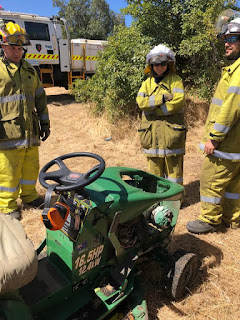 Andy, I can't thank you enough for making this gif of me looking great after nearly 6 hours at a fire  :D 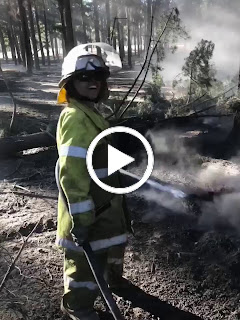 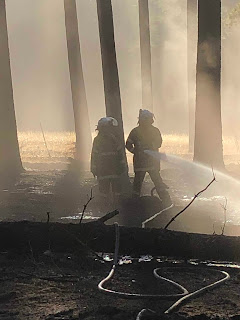 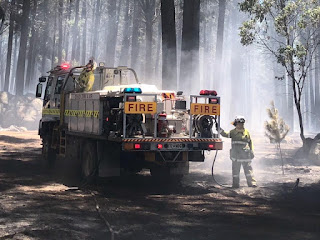 That's me on the right, looking all cool and bushrangery under my smoke mask. We weren't posing, but it couldn't have been better if we had been!

Lots of stuff going on, as usual not finding time to blog it.  I still can't comment on other blogs any more, so if i used to read your blog and comment, be assured I still do read them, and it is frustrating the hell out of me!