It's still so dry here.  We had a couple of turnouts east of us in Wandoo country, and they were rather fraught at first, with fire on both sides of the roads and helitacs dropping water very close to us.  Of course you can't take time to get photos when it's all happening, but I did get this one as we were returning from a water run to fill up the truck. 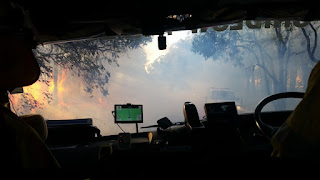 Andy got a few good ones of the 2nd fire when it settled down.  This is me out in a paddock, using a monitor to put out burning cow pats and wet down the edge of the fire on case of flare ups later.  You can see why people use the cow pats for fires in wood free areas.  The little buggers just keep smoldering! 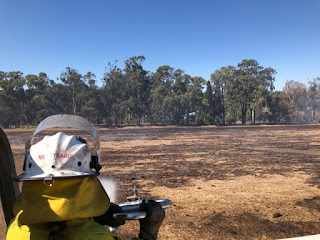 Here's the traditional selfie by Andy! 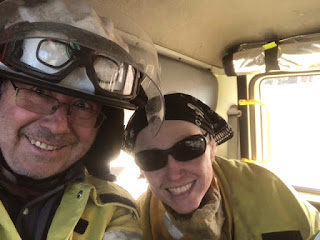 There was a lot less slog in the black stuff than we usually get, just a bit at the end.  I came home from the 2nd fire positively spritely and almost clean, though it's hard to see from this pic how that could have happened! 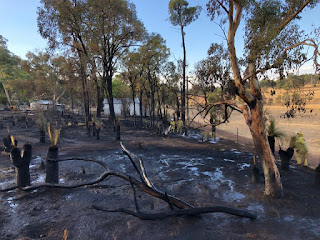 We also took the new caravan out for a trial run weekend.  We went a little under 3 hours up the coast, to a town called Cervantes.  It has a beautiful bay.

I loved these birdy footprints in the sand. 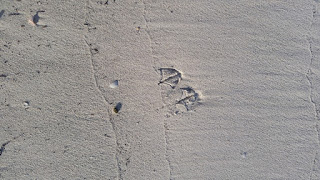 The sunsets were stunning. 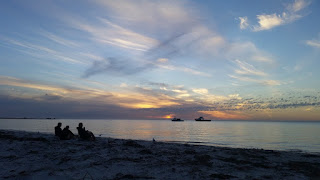 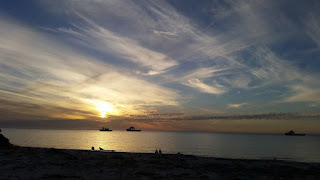 We also went to check out the Pinnacles, which are stone left behind by an ancient forest.  They had really interesting energy.  Kind of treelike and yet stonelike, which I guess makes sense. 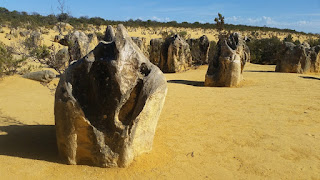 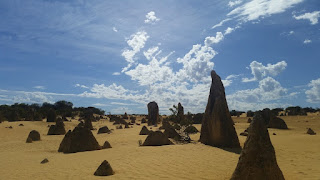 John Grey, if you are reading this, this pic is especially for you! 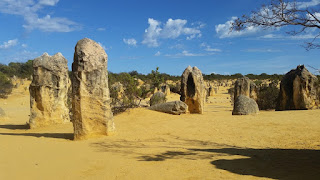 The caravan performed well and I wasn't affected by sleeping in it, so that is good news, but we were buggered by the time we came home, so we've pulled out of plans to drive over east to South Australia.  It's 2700km one way, and we'd need to do the drive in four days.   Um, nope!  Maybe one day we'll do it when we don't have a time limit.

Instead, I've booked last minute plane tickets (or in fact darling Michelle who should be a travel agent has!) and Roo will hold the fort here (and happily read books) while I once more gad off to play with other Druids.  Weeeeee!

Here I am communing with the local King Jarrah with one of my Druid friends, who came to visit on Sunday. It is so nice to be with people who see the world as I do. 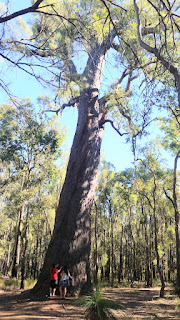 In the world of chicken, things are going on as usual.  Guinevere has two chicks left of the original four day-olds I bought her.  The third chick was a lot smaller than the two that are left, and over the weekend she injured her leg somehow.  It was not repairable and she was in pain, so I had to send her to chicken heaven.  It was sad, but that is life with chickens. She had a good life while it lasted, and at six weeks, she was only a week or so younger than meat birds are when they kill them, believe it or not!

Here she is, tucked very close to mama, while they all dust bathed last week before the accident (whatever that was.) 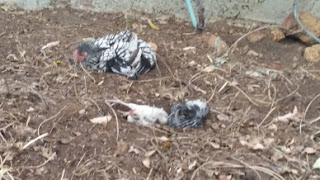 I love how Pongo has his legs in the air!  Yes, it is a he, and the remaining spangled girl is a girl, thank goodness, who I have boringly called Ham for now.  Pongo is some sort of throwback, and has a few black feathers and some brown feathers on the back of his head.  Odd.  He looks rather Dalmatian-y, hence the name! 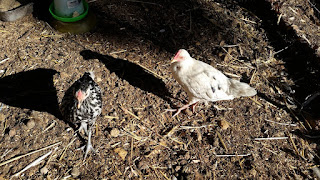 Hamburgs are supposed to be a bit flighty, but so far these babies have been particularly tame for hen-raised birds. 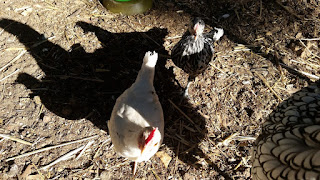 I can pick them up, push them gently out of the way, and they don't turn a feather.  Guinevere is very friendly so that probably helps.  That and the mealworms!

Frankendotte the rooster is now crowing and chasing the ladies, and as expected, just like his dad he has no manners, so unless he goes to a new home this week, he'll be in the pot.  Poor Nanny Ogg's feathers have only just grown back from before Elvis went to rooster heaven.  He's handsome though! 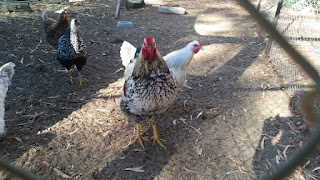 Behind him is one of my two Coronation Sussex girls.  They are such a laugh! That is Mofo. When she needs to lay an egg, she runs around trying to find the very best hidey spot and ends by laying anywhere she ends up when it is too late. She has yet to lay an egg in the nesting box!

This is what waits for me at chicken bedtime. 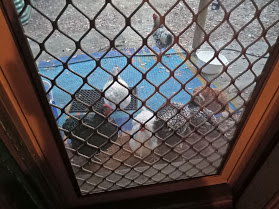 Rosie turned eleven.  I can't believe my baby is eleven.  Dear sweet Rosie. I have no idea how you had such a feisty daughter, who by the way bit our lovely postman this week when he came in the gate to give us a parcel.  I'm so sorry Martin!

Tuppence is a handful, no doubt about it.  I'm not sure why she bit him when she's met him many times before and been ok.  She just has a loose wire in that ordinary lab-looking head of hers and sometimes it goes spoing!

Now I have to find some way to keep her from the driveway when we are out of the yard that attache sot our cottage, and on a rural acreage that is going to be tricky unless I just never let her accompany me about the property.  Ah well, in the meantime, there is my sweet Rosie to comfort me.  Can't you talk to Tuppy, Rosie and tel her to pull her fool head in?


Cyrano is wasting away to a baby elephant, as older family members used to say. 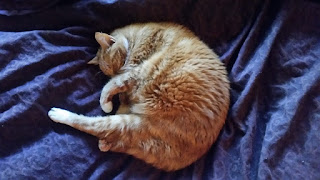 He is definitely getting around more easily.  He might argue that that is no compensation for a full food bowl, but we'd run out of types of medication to add for him, so it was diet or curtains, and I want my boy around for a little longer yet!