There are actually three trilogies in this series of books.  I can't quite remember which one of the first two trilogies was the lucky find by my sister, Jen, in a secondhand book store that got me started on Sheri's books, but I now have a full couple of bookshelves of them, every one she ever wrote, even ones she published under different names, in the genres of fantasy/scifi, mystery and even horror.

I love them all, but I have a special fondness for the books set in the lands of The True Game. This is the omnibus of the first three books. 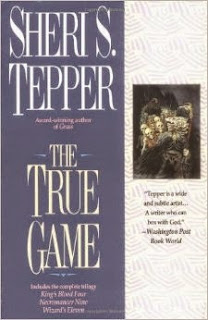 It's a world where a lot of the people are born to possess strange talents, though some grow up to have none and become the pawns of those with the power.  Their society revolves around rules of engagement that have evolved into elaborate rituals, with the most powerful players pulling together other talented gamesmen to play at wars.  So many rules, but they are broken often. It may be called a Game, but it is deadly for many.

Peter has grown up an orphan in a school town, where the young are supposed to be protected from the dangers of the machinations that go on elsewhere.  He is waiting to grow old enough to find out what his power might be, or if he will ever have one. He thinks he is a nobody, but powerful people are starting to weave him into their plots, and at first he has no idea why.  The first three books follow Peter's discovery of his talent, and the adventures that follow. 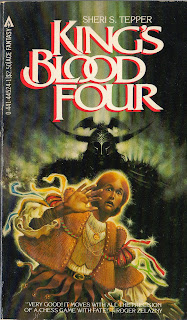 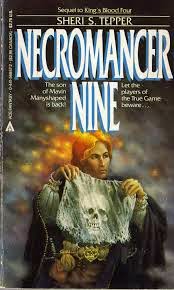 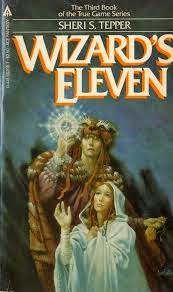 The second trilogy is about Mavin Manyshaped.  She has the talent of shape-shifting into pretty much anything she likes, a rare gift even in this land of wonder.   I think this is my favorite cover of all the varied styles these books have worn over their years. 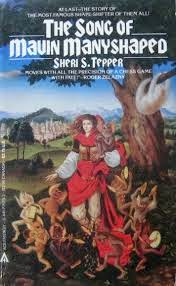 Mavin's story is partly involved in the lands of the true game, but the middle book takes her far off to another land, to a strange society living in a deep cavern.  I think, of all the nine separate books, this middle one is my favorite. 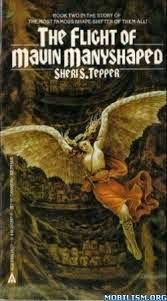 It stands alone as a fantastic story.  I love Mavin Manyshaped.  She is so opinionated and strong, and oh, to have a talent like that!  What a wonder it would be!  The trilogy itself takes us further along the story from where Peter's trilogy ends.  If you buy it as an omnibus, it comes as The Chronicles of Mavin Manyshaped. 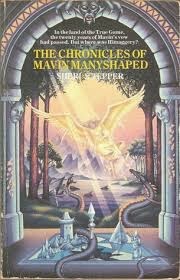 The third series of books are the Jinian Trilogy.  Jinian has an interesting start to life in the lands of The True Game, but she has the fortitude to go on and become a force for good.  She has a talent that needs to be a surprise if you are to read it, but it's one I myself would love to have, even more than that of shape-shifting! 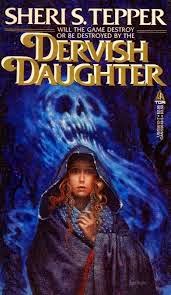 This is the middle book of the three, but I think the first one, Jinian Footseer, is my favorite. This series ties together all that we have learned or suspected from the first two, mostly seen from the point of view of this third character, Jinian.  I love Jinian too.  She is wise beyond her years and rather as I imagine Sheri S Tepper was when young, or perhaps how she wished she had been.  :)

Sheri has this amazing knack for building wonderful characters, but in my opinion she is also unmatched for world-building.  These books begin with a planet of strange wonder in which humans are the relative newcomers, but as the series goes on, we learn more and more about this alien land, and as ever, she has a gentle environmental message woven into the books:  Learn to respect and work within the bounds of your planet's needs, or risk losing all.  Considering these were written back in the early to mid eighties, they are farsighted indeed.

Sheri loves animals too, and it shines through all her works. Thank you, Sheri!  I will never write like you because I don't have your complexity of mind or life experience, but oh I do wish I could!

If you've ever enjoyed a fantasy book or even wondered if you would, I'll guarantee that The Lands of the True Game would be a very good place for you  to visit!  Since she has written 35 books, there are plenty more to explore after that!

If you are more of a mystery fan, try her Shirley McClintock mystery series, written as B. J. Oliphant, or her Jason Lynx mysteries, written under the name of A. J. Orde.