A Firey Sort of Week

We had a fire to go to this week, and some fun Firey training on the weekend too. 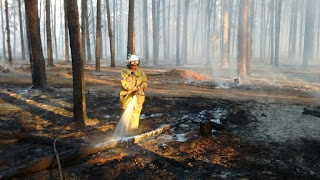 The fire was far out in the forest, deliberately lit, in an area of pine plantation tucked into natural bush.  By the time we arrived the fire was mainly contained by the local parks guys, and we were put to blacking out one edge.  Blacking out means getting everything back to black and wet, with no smouldering left, for at least 30 metres in from the edge.  This hopefully stops any flare ups from traveling sparks later on when you have all gone home.  In bad fire conditions this might be extended to 100 metres or more, but since it is autumn, the Incident Controller felt pretty safe to keep it to 30 metres.

Blacking out can be a grotty, slogging sort of job, but with the right team it can also be fun.  We had a good team. 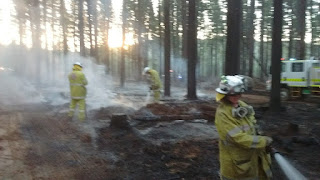 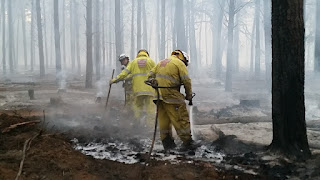 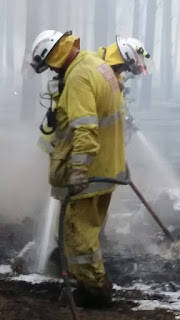 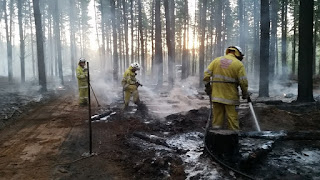 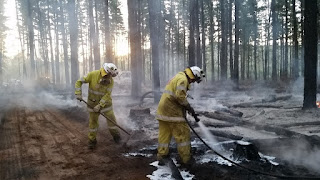 It was quite an unreal scene as the sun went down.  Beauty from destruction. 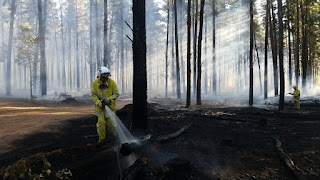 This one came out especially arty! 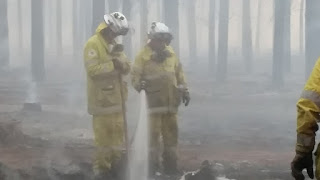 There were no hydrants out there, so we had to make trips to a nearby dam to refill our tanks, which gave us a bit of a break and a chance to see how the rest of the fire was behaving and being dealt with. 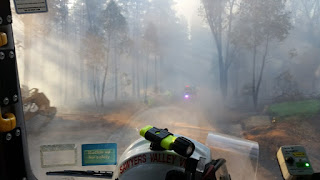 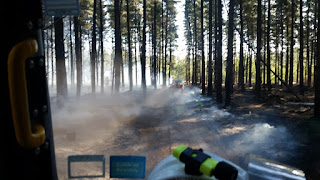 It was a good fire, if such can ever be said to be good. It was soon under control, there wasn't much damage to real bush or animals, and we were finished and home again inside five hours.  We even got fed a nice dinner!  We'd have been home even sooner if we hadn't got lost in the bush on the way home in the dark.  Never trust a GPS on bush tracks would be my advice.  It kept trying to turn us up tiny tracks that the 1.4 might have got stuck on!

Having missed early turnouts in what was a very mild fire season, I was glad to get a bit of practice back under my belt.

Training helps to keep you in practice though. We had a good session on Saturday with hooking up the vehicles together using different water delivery methods.  We got bloody good pressure using suction on both vehicles!  Blimey! 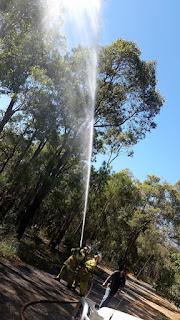 That's sister Jen and I.  Doing stuff with Jen is always fun.  She is so enthusiastic.   :D

On Sunday I slowed the pace a bit and went over to Jen's to give old Jerry a bit of pampering while she rode her boy, Fionn.  Jerry loves attention.  I even found his rhythm beads and put them on to dress him up a bit.  As an old pony club pony, Jerry is very used to wearing bling and costumes and he reckons any fussing is his just due.   There were plenty of pieces of carrot too, of course! 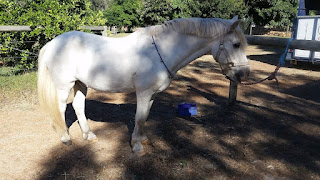 At just shy of 28, he is looking fantastic thanks to Jen and her family's good care.   He still thinks he is Pegasus, bless him. 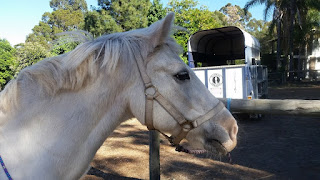 He is a dear old boy and we are still fond of each other after him living here with me as company for Archie for a while a few years back.

Speaking of which look, at Archie!  He was always meant to be trick pony.  I definitely sold him to the right home! 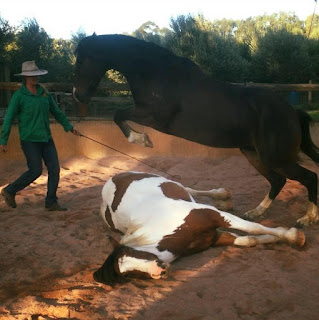 He will be in his first demonstration soon.  I can't go to that one because I am at a course for the brigade, but hope to get out to see him do his thing one of these days.