We did a lot of good stuff over the weekend.  We had Fireys as usual on Saturday morning, and it was a jolly one, with lots of my favorite people showing up. After that we had lunch and watched an episode of an old version of Jane Austen's Mansfield Park, which was so relaxing.  Then I played both of my favorite musical instruments, and did some crochet, and then we went off to represent our brigade at a local twilight market event. 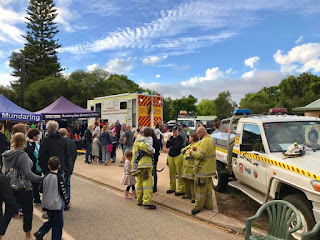 It was a really successful event, packed with happy people, and we all had a good time chatting to locals and Fireys from other brigades.  Everyone was recruiting like mad too!

Sunday was working on the property, more Jane Austen, more music for me, and a game of Startrek Catan with Andyroo.  It takes a while to set this game up, and Cyrano decided he had to be involved as usual. We were a bit worried he'd walk across the board and knock everything flying like a giant marauding space-kitty but he was a good boy and settled on his squeezed up table-towel for the whole game. 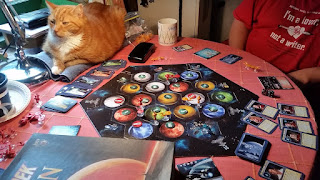 Andrew beat me soundly, but he wasn't a bad winner at all.  No, all that Mwahahahaha stuff was purely throat clearing! 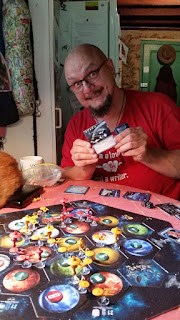 I always find that particular game rather frustrating, even if I win.  It can be annoying at the start when you aren't collecting any cards or getting to buy spaceships for this or that reason  Generally someone wins just when you really start being able to get moving on your evil plans for galaxy domination!  I still get the urge to play it every now and then. It is so pretty.

Niamh's crocheted afghan is in the early stages, but I think the colours are working really nicely.  I'm finding already that doing one big square offers different colour and pattern considerations than lots of small ones.  I think it could be a bit busy if I don't have some areas of multiple rows of the same plain colour, so I'll incorporate some of those as I go. 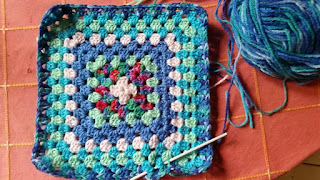 Mister Kitty is extra snuggly just now with the unseasonably cool weather.  Poor darling is on a little bit of a diet because he is having trouble jumping up onto the furniture. He is getting a bit elderly now and not as spry as he was.  We have started putting step ladders here and there for him so he can safely get up to his fave high spots, and I haven't seen him go upstairs via the steep steps in ages. Not sure the diet is having much effect as yet though! 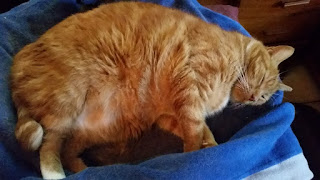 A couple of times this week, he has walked up to me while I was on the computer and insisted on a cuddle, and I have picked him up and cradled a huge bundle of ginger fur in my arms, snuggled up to my face, purring away, until my are muscles call it quits and I have to put him down. He really is quite a sweetheart.  A very large sweetheart! 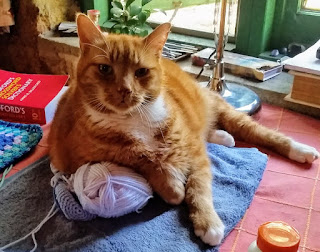