On the way anyway!

Mr Cyrano Fitty Kitty has to sit on Daddy's lap a night instead of mine, so he isn't entirely enthused about that.  That's not to say that he doesn't sit on daddy at other times, but he is a kitty of habit and evenings are for mama's lap. 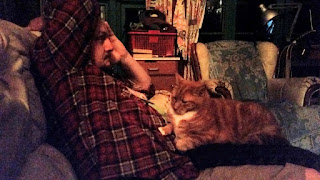 I've had plenty of crochet time, so am moving along nice and quickly on joining up the daisy afghan.  I took it outside so you can actually see the proper colours for once.  Bright, I know!  I'm kind of glad about that, since all the green alone was a little too cool.  I hope my recipient likes yellow as well as green! 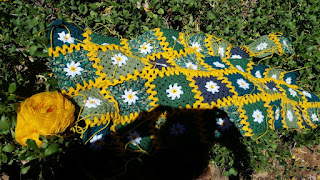 Note clever addition of shadow.  Looks like I am sticking my fingers in my ears and doing the waggle at someone!

It is barkfall time for the eastern states gumtrees again.  I'm sure it hasn't been a year!  I wonder if they do it twice a year? Mum's big Lemon-scented Gum is at it again.  I thought this combo of old and new bark with the same wrinkles was very nice. 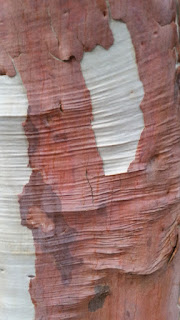 And while I was getting that shot, Andrew was taking this pic of me. He found my choice of fashion to be daring but attractively piratey. 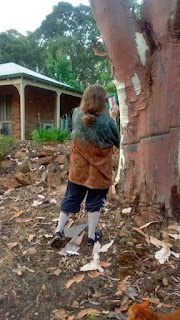 Well maybe not, but it amused him mightily.  What can I say, I was still wearing the compression sock things they give you to avoid blood clots when you are resting post op, and I'd tucked my tracky pants into the tops to stop prickles getting into the dragging cuffs  as we had a gentle stroll.  Anyone would do the same, right?  Arrrrr!    :D

This was the sky yesterday evening.  It soared and glowed. Truly, how could we not think we are surrounded by miracles of nature every day? 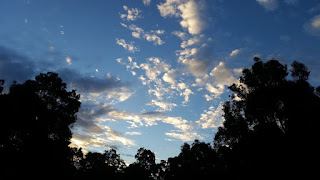 
"Y'know, people say science doesn't care if you believe in it or not. But that's what I like about magic. Magic cares."