It's good To Be Home.

Day 5 after my operation and I'm beginning to feel a bit more like myself.  Did a little leatherwork today, tinkered on my lyre last night, things like that.

It was an interesting experience for someone who has hardly been to hospital in her life.  I last had an operation back when i was about 15 and that was just exploratory. A few stops by due to horse-related injuries, and then the one when i reacted to Penicillin the first time at 18.  That was fun.  Since those days I've become sensitized to so many things, and it is a credit to my Gyno and Anesthetist's research and care that I didn't react to a single drug they gave me, which was my great fear going in.  Acute Porphyria is no joke.  It can stay forever once triggered so it is well worth trying to avoid (think of the madness of King George.)

As you can see, like most people I was looking my best post op (Thank you Andrew, Dear One, for taking this.) 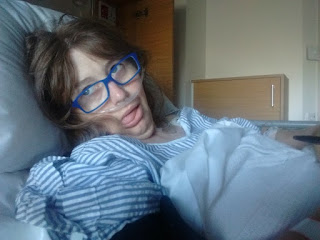 Look at me all pretty in matching blue.  :D  Actually I felt pretty good unless I sat up, at which time i got the woozies and felt sick. That has taken a few days to slowly get better.  I mostly dozed and did crosswords, which I found easier than trying to maintain concentration to read.

Actually, I did react to something in the hospital... the food!  I am told it is always pretty crappy there, and i do have food restrictions that make it harder, but really, who still makes food likes this? 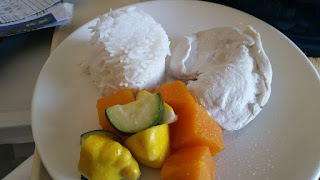 One of those white lumps is rice and the other one is 'steamed chicken'.  I have never tried to eat anything so horrible in my life, it wouldn't even go down my throat properly, and that chicken pales to insignificance compared to the grey 'grilled steak' which replaced it, also with rice and veg, for dinner.  I have no idea what they did to the steak before they 'grilled' it... buried it underground for a hundred years perhaps, but it not only made me react, it didn't do Andrew any good when he ate what I couldn't.  Yeesh!  Good health is partly good food, and surely better food would make people heal better?  Luckily we took in lots of supplies from home, so when things like non-gluten-free toast arrived for my breakfast (I knew because it smelled too much like real bread and sure enough it was) I could turn to our own supplies instead.

The best thing about all of this, apart from my lovely hubby and sister who kept me company in hossie?  Going into this thing with my support crew of spiritual guardians.  I could feel them around me as I went into the dark of anesthesia, and on that first afternoon as I was still waking up and feeling so sore and sick, there were ravens outside the window calling.  I kid you not.  My window looked out onto a small garden between wings of the hospital, and outside were calling ravens.  Not coastal suburban birds like seagulls or pigeons, or swallows, or even the ubiquitous magpies, but ravens.  There is one calling outside the cottage right now as I type this.  Hail Odin! 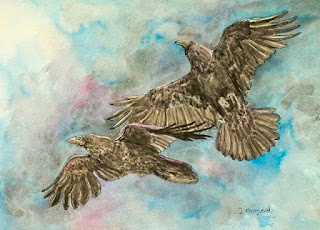