The Making of the Cover Art For "Freya and the Hairy Goddess."

I'm writing and posting this on Thursday because my computer has been behaving a bit oddly and I don't want to miss posting tomorrow.

Starting tomorrow for four days, Freya and the Golden Bear, the first book of this series, will be free for kindle from Amazon.  Go for it!  Have a read!  What have you got to lose?  It's a wild adventure full of interesting friends and foes, and should make you laugh too.  I certainly wrote it to be light and funny, and by all accounts it hits the spot.


The second book of the series, Freya and the Hairy Goddess, is now available on Amazon as well.  My first readers tell me it's as if the first book never ended, except that the two stories do stand alone.  I'm not a big fan of cliffhanger novels, I'd rather give you your money's worth with each book.  So, if you enjoy the first one you've got for free, which I'm sure you will, do buy the second one too.  :)

I was a good little artist this time and remembered to do some progress shots for the art work, so here goes.  There were a few pages of sketches done first.

Some were me working out how I wanted the cover to work.  The first idea wasn't quite right.  Too much of the giant vulture went onto the spine and back cover.  I tried some very different ones but kept coming back to the snow vulture.  I'd had that image in my mind for ages and knew it could work, I just needed to change the way the three figures interacted with each other and the required cover format. 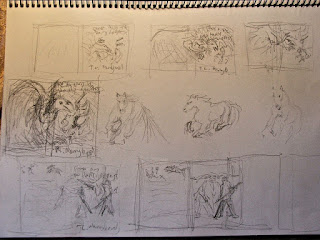 So I kept sketching. 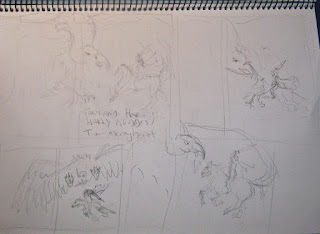 Until I hit on the right one.  See the bottom left drawing?  Oh yeah, that was it!

So it got played with some more. Note the studies of vulture feet down the right hand side.  :) 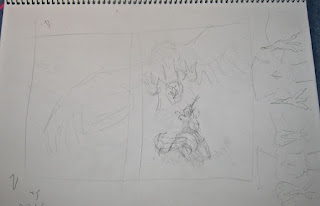 And I spent some more time getting Freya and Dinna just right. 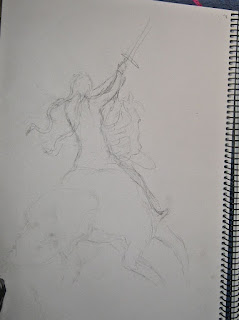 And then it was time to go for the actual canvas, already base-painted with blue, and to draw it one more time.  Actually it was drawn twice more, because I decided my backing blue was too dark, and I got the positioning of the figures a bit wrong, so I over-painted the backing again and redrew it. 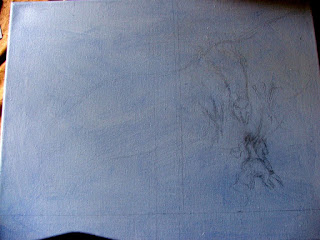 Then I began to line in some colour. I was aiming for most of the scene to be in blues and whites to let the main features really stand out and yet allow the text to be easily visible, so I needed the white feathers to be outlined in a slightly darker blue to bring them out of the white and blue background just enough to show up. 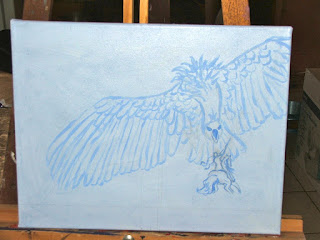 So, then it was time to block in some white. 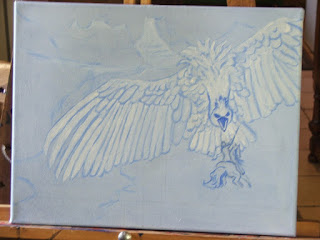 I'd drawn a kind of topknot on the vulture but decided it looked too much like angry Bigbird, so I changed it into a full ruff type thing around the head, which looks way cooler.

I also had the neck bare of feathers, and therefore pink, at one stage, but it looked hideously... well... the best word to use here is probably,"phallic," so that had to go too!  :D

And so I just kept fiddling and layering till I had it how I wanted it. I was deep into art space by then and forgot to take more photos as I went!  Whoops! 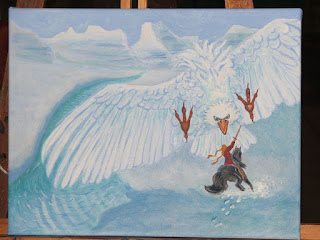 After that it was kindly photographed by Andrew and it was time to open Gimp to get the cover finalised.  What do you think?  I wanted Freya and Dinna's bravery and teamwork to stand out on the cover.  I hope they do, and I hope it encourages you to want to read the book.  It was so much fun to write, and I'm sure you'll find it so if you read it.  :D 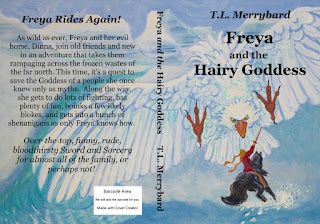