About Freya and the Golden Bear 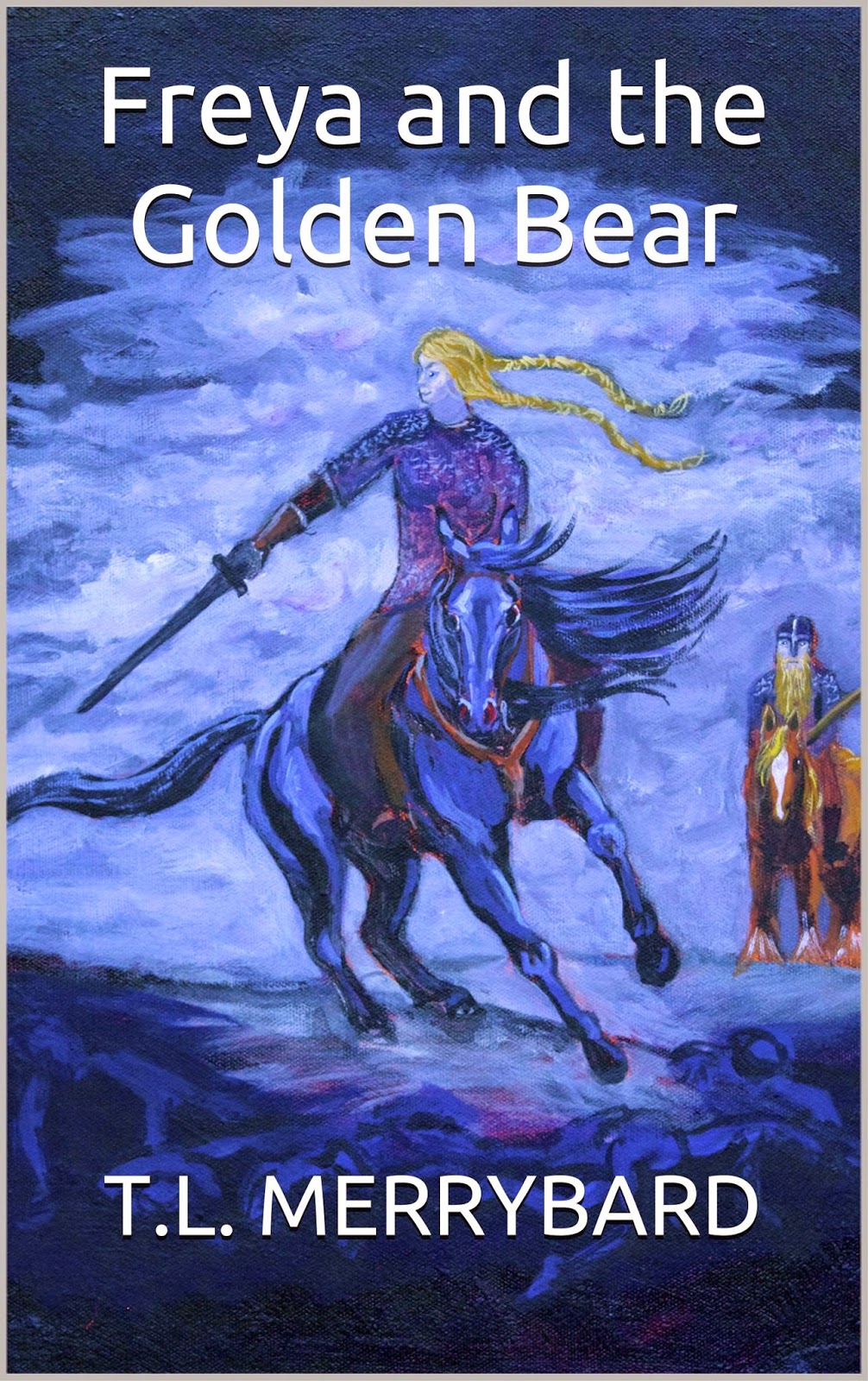 The character Freya Fjordrider began as a persona for me in the SCA (Society for Creative Anachronism).  I chose the name Freya because I'd recently moved into a household of Pagans and begun to discover the Gods other than the Christian God, and Freya of the Norse Pantheon was the first Goddess who came to my attention.


I chose to add Fjordrider to my name because I then owned a little mare called Sherry.  She was buckskin, and Fjord horses look similar (though are golden or cream duns).  She was actually a Part Arabian and not really very Fjordy at all!  I'd like to own the real thing but not many Fjords in Oz, even now.  Sherry was a fiery, opinionated little lady, who never walked if she could prance, or trotted if she could instead canter sideways.  I adored her and she was mine till the day she died.  Anyway, she was close enough to a Fjord, so Freya Fjordrider I became at SCA events. I think I was about 22 then.

This is Sherry and I at a camping event we had held at our place. On one of the days, we had a Quest, and Sherry and I had been charging about through the forest pretending I was a bored immortal. If questers encountered me, they had to work out that I needed to be entertained in some way in order to be convinced to give a clue to them.  It was heaps of fun. 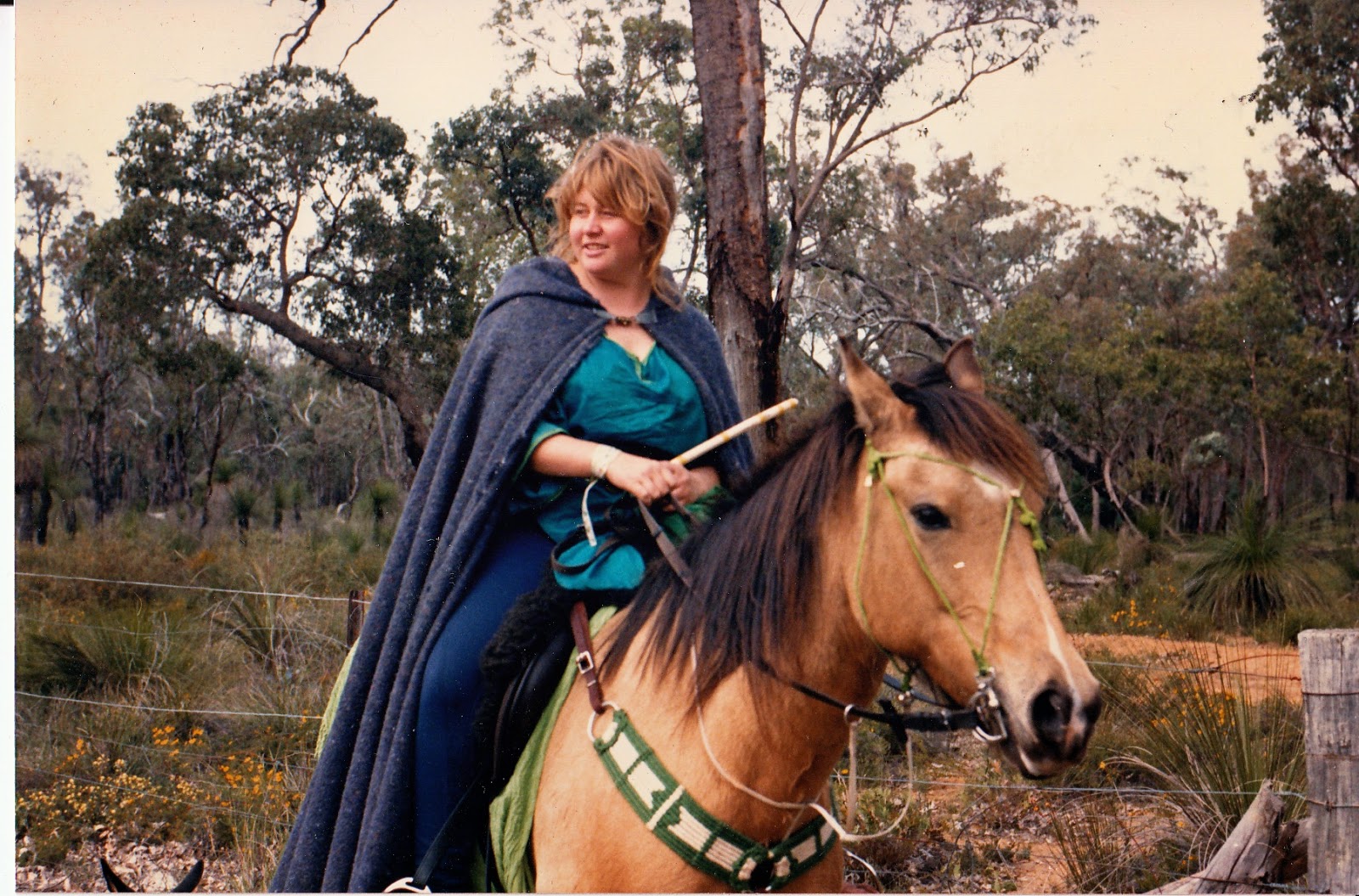 By the time this photo was taken, Sherry was a bit over it, as you can see from her expression!  You can just see the somewhat tired ears of my dear heart dog, Keech in the bottom left of the photos too.  She and her sidekick, Sam, were a little tired of traipsing back and forth through the hills as well!  For so many years it was we four together.  Me, Sherry, and those two dogs, Keech and Sam.

Anyway, at some point the character of Freya Fjordrider, in my head, became louder, wilder, and stronger than my SCA persona, or I, myself, ever was.  By the time I was stuck at teacher's college, knowing it wasn't the right place for me but determined to stick it out till I got my degree, she had become a bit of an icon for me.  What would Freya do, I wondered to myself in certain situations. Generally be a lot more outspoken and have a lot more fun than I was having, I usually decided!

So, in those teacher's college years, and on into the time I spent as a bad relief teacher and then as a better youth worker, I wrote that first novel, Freya and the Golden Bear. The more I dressed and acted as something I wasn't, crushed myself into a mold I was never made for, the more important it was to spend time writing Freya's adventures. All my formative years of reading Robert E Howard's Conan books, and all those Asterix Comics, stood me in good stead, as Freya and her bad-tempered horse managed to fight their way out of every situation I put them in.  I think she somehow also channeled Harry Harrison's Stainless Steel Rat, another of my early favorite characters.

I had a ball with it!  I wrote it on a little orange manual typewriter that my Grandmother had given me as a present way back when I'd first decided I wanted to be a writer.  Often I'd be sitting right by my potbelly stove on a cold winter night, typing away madly, with the typewriter on a milk crate and me sitting on a low footstool, the better to be right by the fire and warm as I wrote.  I remember I was deep in the middle of some exciting scene one time, when a log fell out of the open door of the fire, and I jumped right to my feet and was all set to fight off the invaders, I was so adrenalised.  I was very glad no-one but the dogs was there to see me do it!

Of course it's had a lot of revisings, this book, but as I've polished it, I've always tried to maintain the energy and rough humour of it. I think I've managed that.  It's for sure the funniest book I've written yet, and also by far the rudest!

The latest book I'm writing is about as serious as anything I've done so far. Not by planning, it's just how it's worked out.  I do wonder if perhaps my next book will be a revisit to the world of Freya Fjordrider, just to really loosen my writing up again.  She has plenty of land left to rollick over yet! 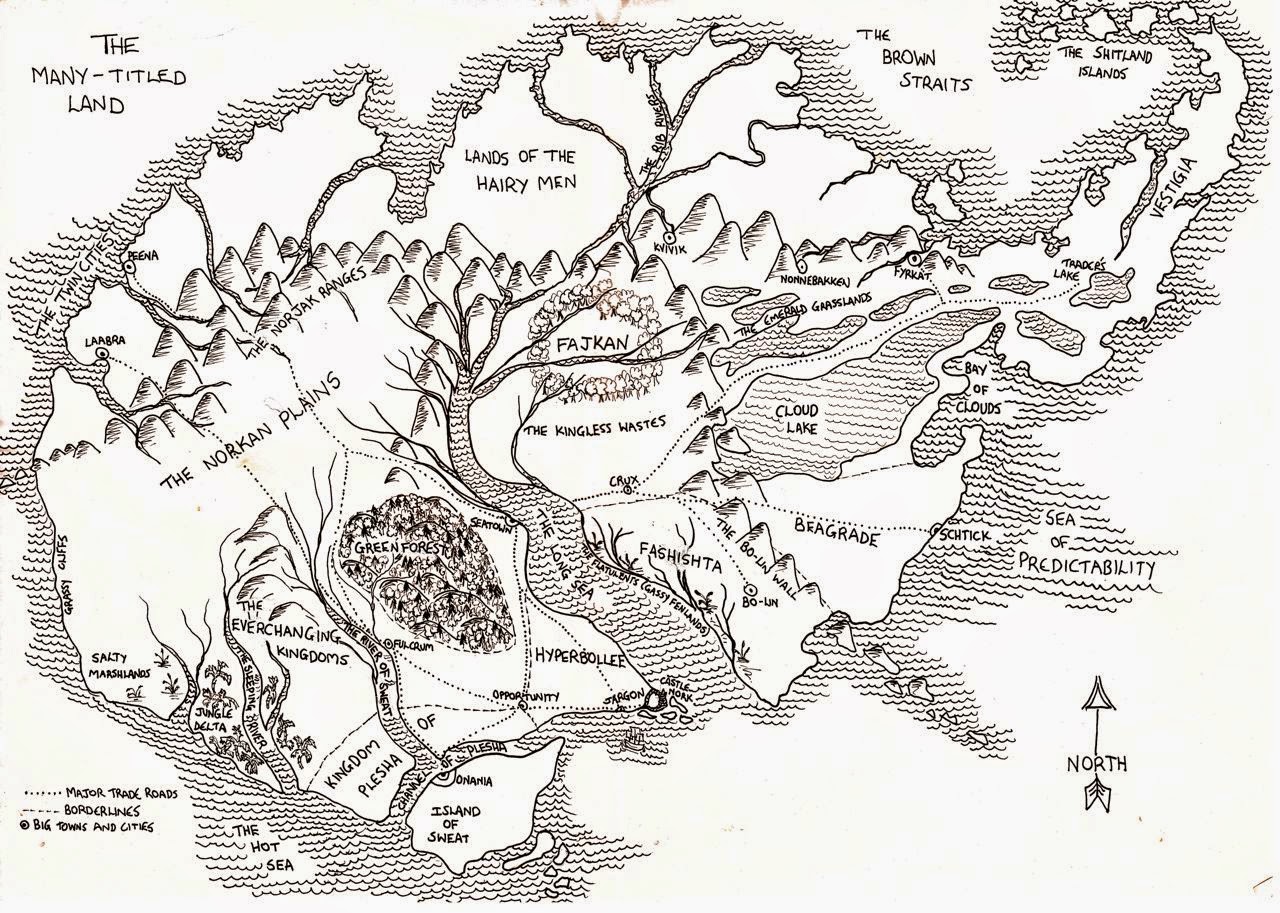