Catching up on Stuff

We've only had one fire so far this week so we've had a bit more chance to catch up on stuff at home.

I've got an afghan to finish by early March.  Of course I thought I had ages so I didn't do enough on it as the weeks went by, then suddenly realised I only had a month to finish it!  Gawd, sewing all those squares together is very far from my favorite job!  Especially when it's a dark colour yarn you are using.  Finding the correct stitches to pick up requires not only glasses but a head torch as well!  Cyrano Superkitty has been helping me as much as he can. 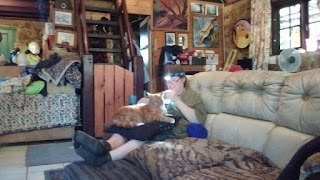 This is the piles of squares organised ready to sew together.  Can't show you any more because the person knows it is coming, but not how it will look! 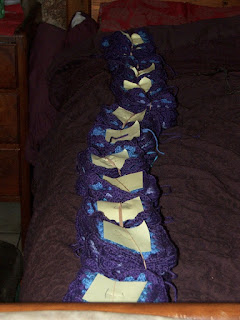 I think that this is my last conventional granny square afghan unless I can find some other way to get it all put together at the end.  Argh!  Next time I'll make one that comes together all in one piece.  Maybe one of those zigzag ones, or one big square where you just go round and round?  I like the idea of those ones you make where you use a certain colour depending on the temperature of the day.  They come out looking a bit like this: 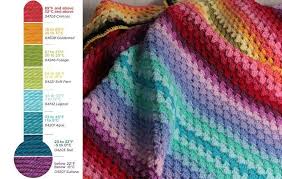 I've finished my first read through and edit of Heroic Plans, the sequel to my first horsey mystery, so it's time to delve more deeply into it now, and begin work on the areas I need to brush up.  It's not bad, though. It flowed well as I wrote it, and that easy flow shows in the first draft.  It's a fast and fun read!

I've been really pleased by the sales of my books since I did the free offer on the first Freya book. It has really stimulated a lot of interest, which I guess means people must have read the freebie and come back for more!  Woo hoo!

I know people who see my Facebook page have seen this pic, but I love it so much that I just have to put it here as well!  This is Andyroo and I at the fire station.  I was getting in from my five hour shift at a local bush fire. Andrew was about to go out for his shift at the same fire.  2nd Lieutenant Keith got this photo of our glad meeting in the middle. 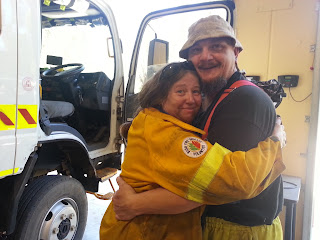 Andrew has been up a tall ladder working on the big roof beam of the cottage.  I think it is a design flaw that the big laminated beam, that runs right through the cottage, also sticks out the ends into the weather.  We filled and painted it a few years back when we were repainting the weather boards, but it needs still more protection, so Handy Andy is making boxes to put over both the sticky-out bits to keep the weather off them in future. He also plans on using the boxes to affix aerials to, so it's not all done from altruism.  :) 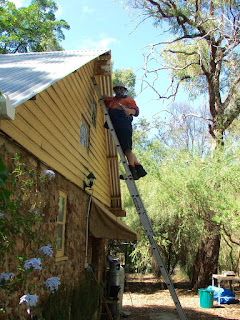 Andyroo hasn't lost his face, he has a mask on for the sanding.  :)

Angus has his collar off now, but he managed to look so handsome even while wearing it that I had to take another photo of him! 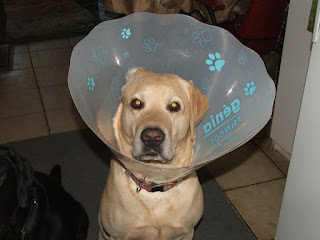 His uncles and aunty have recently turned six, and Facebook has sent me memories of the photos I posted of the puppies as they grew.  It reminded me of this sweet video we got of one of the pups from six years ago.  We called him Tonto. He was a character, even in a litter of characters, and went on to belong to one of the local vets.

Cyrano has been working extra hard this week to make sure we all feel loved enough.  Sit down and you automatically get a fat kitty (whether you want one or not.) 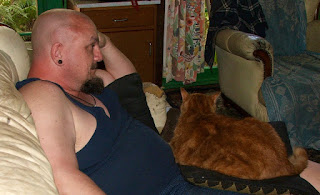 A friend lost her precious kitty this week.  It makes me appreciate our sweet boy even more than usual.

May you have a good weekend filled with the love of furry people, and not so furry ones too!