Perth from on high 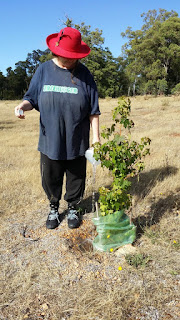 It's going to be a hot one today!  41C which is about 105F.  We've already been up to water our little baby trees up at the block this week, and the Oak and Liquid Amber get an extra water each week too.  The little Oak looks great this year.  It has put out side branches and looks like a miniature version of a big trees!

This tree is a fourth generation baby that stems from my Great Grandma's lovely Oak tree that she loved so much.  We had Christmas Eve dinner under my uncle Greg's tree, which he also loves and which is the second generation, grown from an acorn which came from our Nanny Smith's tree. Mum has a couple of third generation Oaks here that she grew from Greg's tree.  As a Druid, I love that we have a family tree tradition. Maybe that's one reason why I am a Druid.  :) 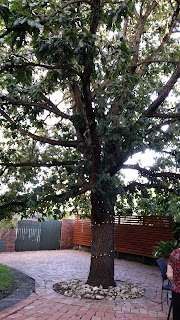 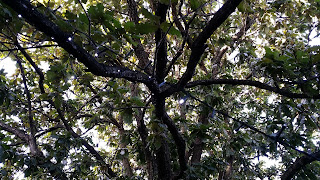 Unlike the local native plants, who pretty much get by alone after one summer of care, our baby Oak tree is going to need some years of nurturing to get it to the stage where it can look after itself, but once it has its roots down far enough it should be ok. One day it will hopefully shade the house of the person who builds here, whoever that might be.  That may or may not be us!

Every year or so, we pop up the road ten minutes to check out the place we lived in in 2000/2001.  Actually, we don't go to look at the house, we go to see how our trees are going!  This verge was totally bare when we bought this block of land. It had been bulldozed to put in underground water and power and was nothing but compacted gravel.  We and our neighbours across the road both planted up the verges on our sides and cared for them over those first summers, and look at it now! 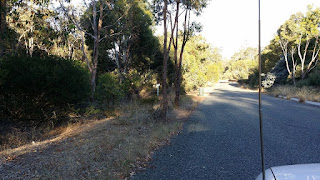 You'd never know it had once been bare!


Last weekend, I went with Andyroo to meet a group of amateur radio friends of his, the F-Troop group.  I listen along on the weekends to this group, so I wanted to put some faces to call signs.  I took crochet along, since I expected to be totally out of my depth at all the radio talk and was happy to just let the chat flow over me, but actually they are a really nice crowd and I was not particularly left out.  Thanks guys! :)

The dog there is Barry's seeing eye dog, Pluto. I was happy to see a Labrador doing one of the things they do best, and since he was off duty I got to give him a nice pat and tummy rub.

The meet-up was held at Wireless Hill, a park near the centre of Perth.  It was cool to find they have kept one of the old aerial supports as an observation tower.  Note the thumb over camera!  Still not got the hang of using mobile smart phones.  :) 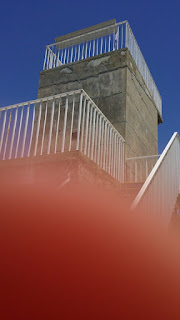 I had a lot of vertigo in the lyme years and would not have attempted this climb up the open metal stairs that circled the tower, but I actually went up it twice, and once all by my self!  The view at the top was lovely. You could see right across the Canning River to the Swan River and beyond that to the city of Perth proper. 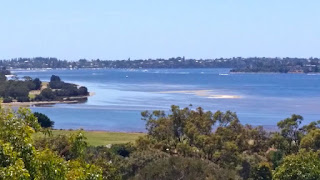 I haven't messed with the colours there.  It really was that purpley-blue!

There was a photo mounted at the top, showing what this view looked like in 1935.  There was basically nothing there but bush and the odd homestead from one side of the landscape to the other. 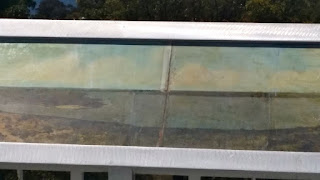 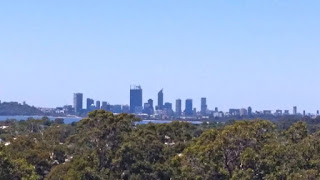 And there's our dusty, ancient hills to the east, behind which is our beloved forest home.  When I go east towards them, I feel them pull me homewards like a cord tugging at my heart.  Other Hills people say the same thing. We call Perth itself "The Flats" and not always kindly.  :) 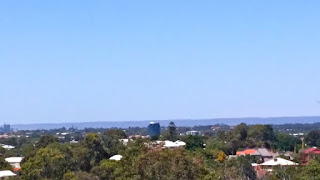 This lovely trees was in Wireless Hill park.  It had kind of willowy branches, and am amazing puzzle of a trunk.  A Eucalypt of some kind but I have no idea what. 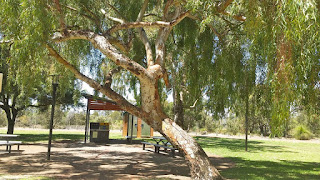 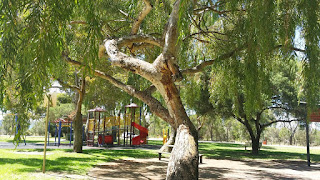 I think it must get windy up on that hill at times, to see the shapes the trees have taken!

Today I am going to be working on my cover art for Freya and the Hairy Goddess.  My first readers loved the story, so now it is all go to get it ready for publishing.  That means more editing, and getting my act together on the cover!  I've done a lot of drawings and now it's time to start putting the cover art onto the canvas.  I've been a little ambitious, so we'll see how it comes out.  I'll try to remember to do progress shots for you.

Here's my last Amigurumi gift of the Christmas period. It's a 'faithful' rendering of our Brigade Captain, John, which I gave to his wife Vicki in thanks for all her hard work for the Brigade.  Vicki is lovely and she loved this gift, even the rendering of his bald head, luckily!  :D 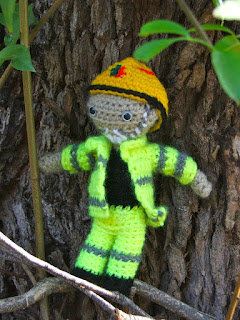 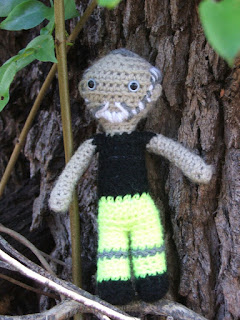 The only pattern I had for this one was a small doll pattern I made up for myself when I made mini-Odin.  After that I wung it.  :)


Finally, here's a picture Andrew got of Angus and Tess snoozing under the table over at Mum's.  Angus loves his Grandma Tess.  I think she would prefer a little less snuggliness  :) 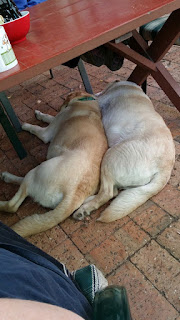