The birth of the Cover Art for Cunning Plans

The Kindle version of this book has a perfectly nice painting on it, one I did for a lady who did me a favour many years ago.  This is Ruby. 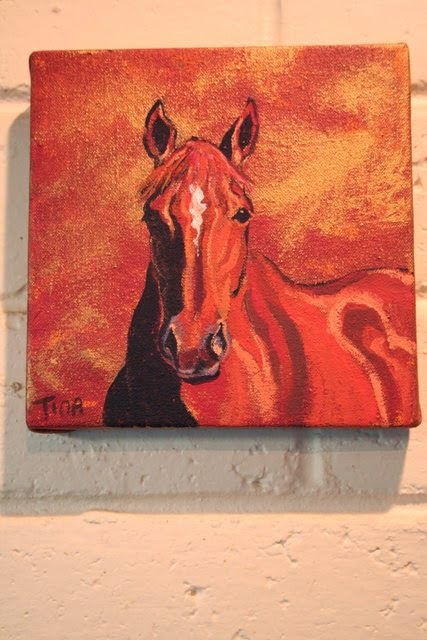 I shortened her long star in Gimp to make it match Lingo, the horse from the story, better. 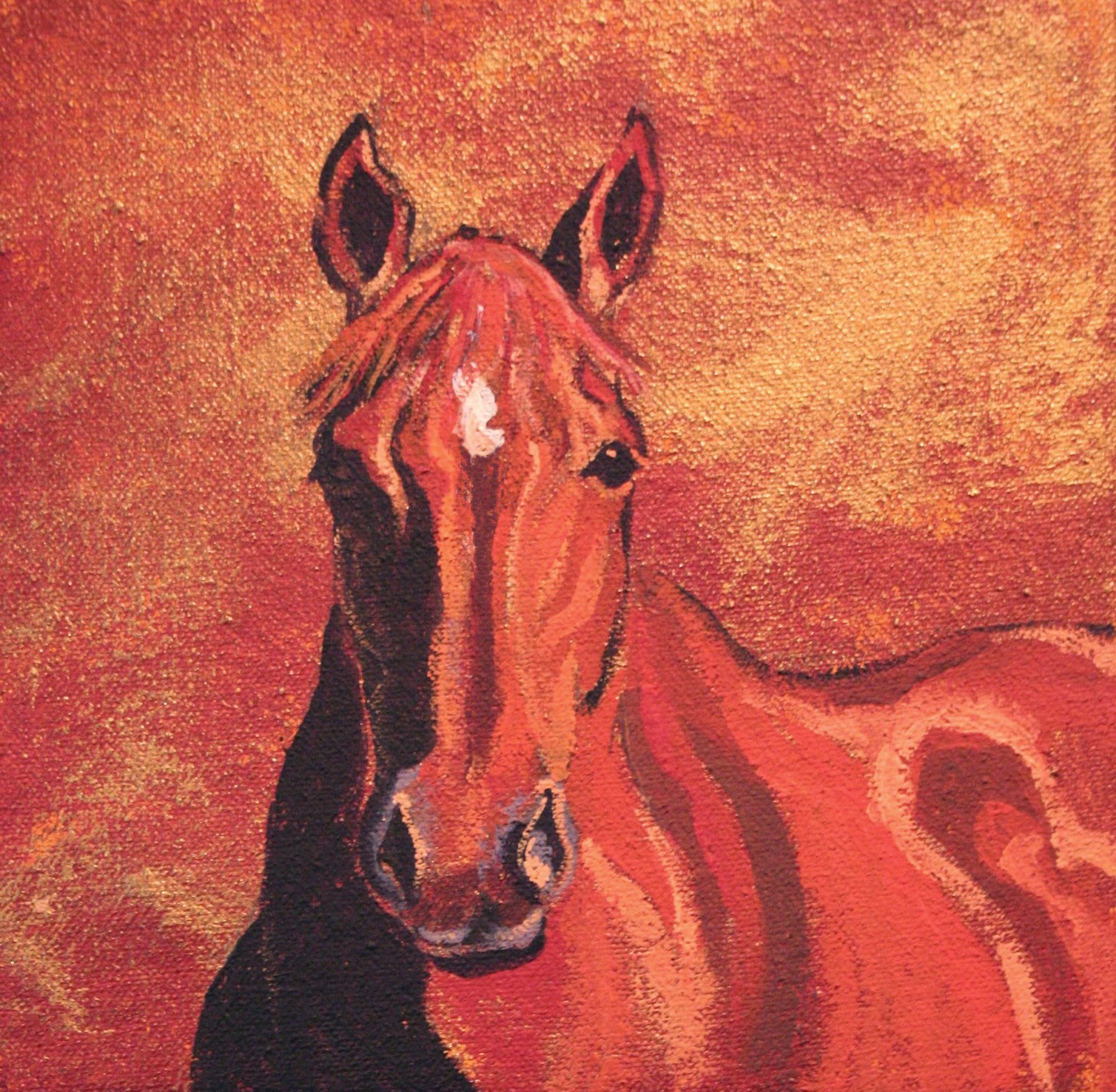 Trouble is, this horse was a chestnut, yes, but also a little Standardbred mare, and every time I look at her, I know she isn't a tall Thoroughbred gelding. So, a new cover for the print version had to be made!

Since there are no chestnut Thoroughbreds in my life to use as models, I began with a mix of photos searched off Google. I can't show them here because it wouldn't be fair to the owners.  I worked from them all so that there is not a particular recogniseable image to cause copyright problems.

I knew exactly what I wanted to do composition wise and since I was using acrylic on canvas, I had a lot of wiggle room for fixing issues that cropped up, so rather than doing lots of sketches, I just drew right onto the canvas and got down to it.

The original drawing was done in white pencil on a gold and brown background.  I then painted over the drawing with dark blue and filled in the spaces with red, because the gold was shiny and making it hard to see what was going on!  The brown and gold were just left-over paint that I had brushed onto the canvas years ago, rather than waste it. I won't do that with gold again!  :)  You can see it showing up around the lines, and even in the finished work it is still here and there a little. 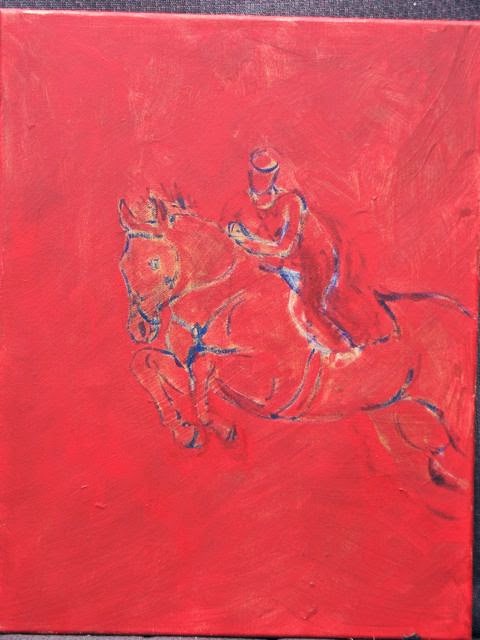 I drew back over that with white pencil again to fix things that showed up when I could see it better, and to add a little more detail. 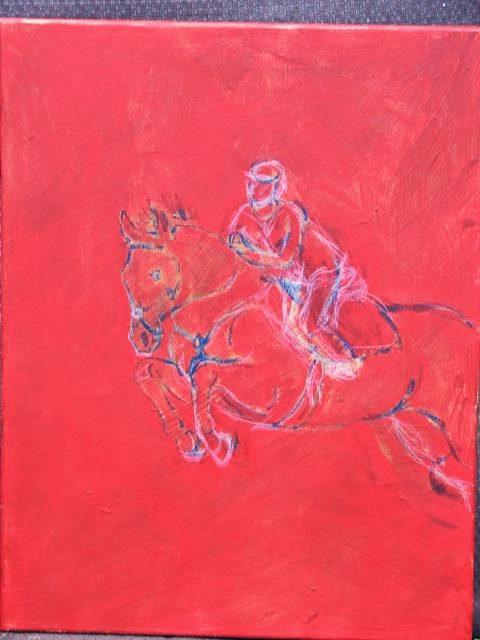 Next stage, adding in blocks of colour. 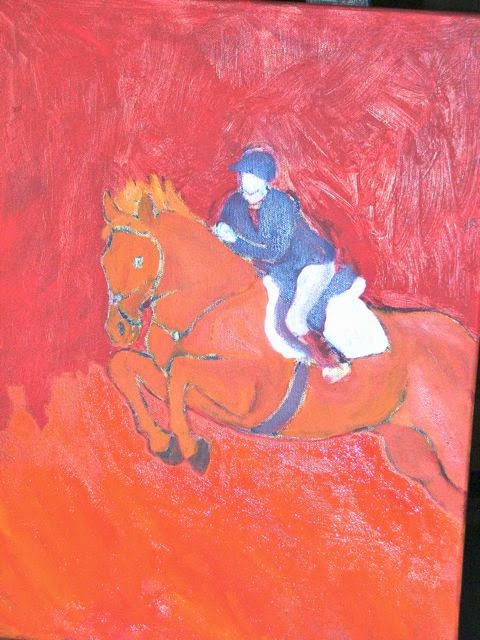 More colour and lots more work on the horse. I had an idea that Kat might use green on Lingo to celebrate her Irish blood, and also that it would really zing against the complementary oranges and reds.  I was happy with how Lingo was going, but I really wasn't happy with the rider. 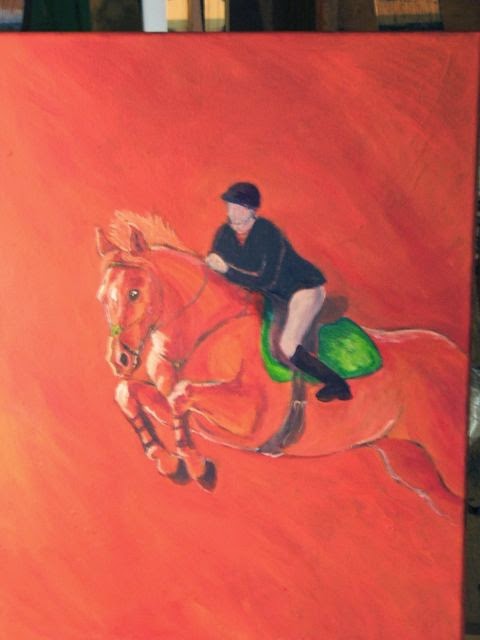 I slept on it (and painted it in my dreams half the night) and in the morning I got up and overdrew it with white pencil again.  The lower leg was too long (for an ex-jockey's!) and tipped too far back.  The angle of her face was wrong and head/helmet was too small. 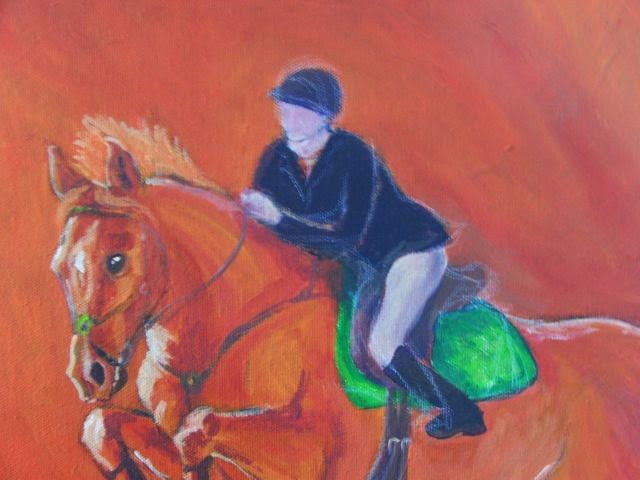 I was happier with that all fixed, but the green saddle-cloth was just TOO zingy and detracting from the rest of the image, so I took it back to dark blue like her coat.  Better! 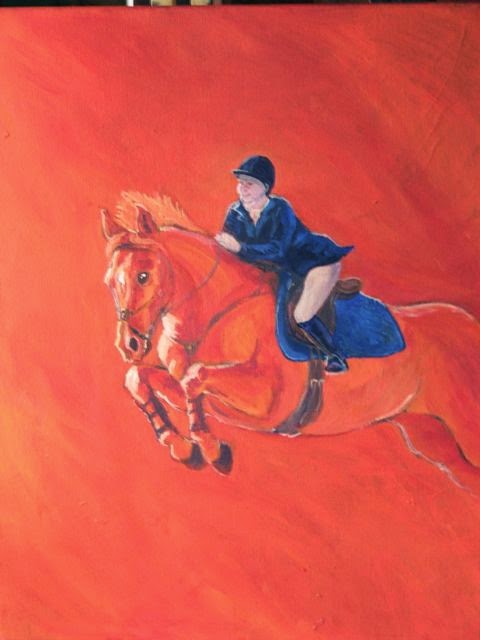 But I still didn't like it so I took it back to a numnah-shape. 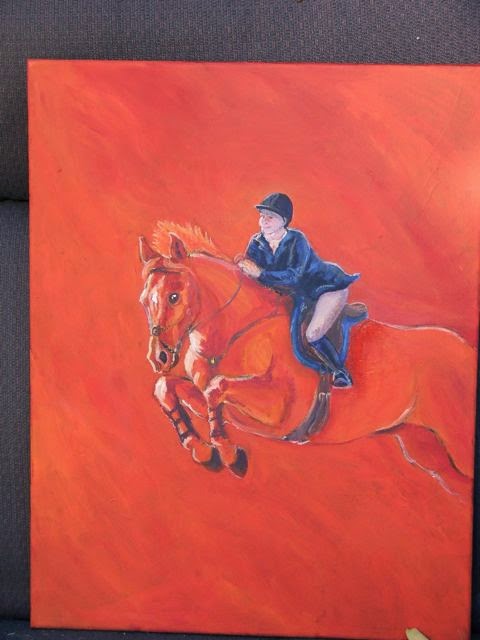 And so, a few last touches here and there, and all finished!  I thought a dark blue/purple to match Kat's riding coat would work well for the title and author text areas, which will go above and below on the red/orange.  A bit of a close up of the finished figures. What do you think? 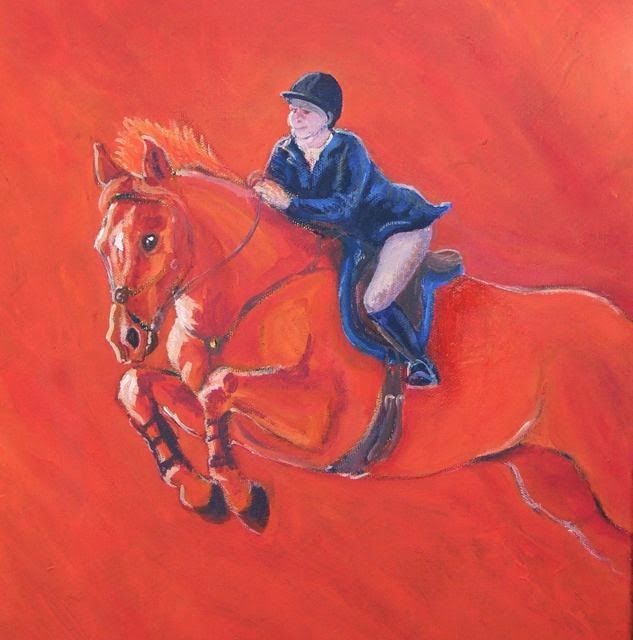 I'm very out of practice working with acrylics, but I think it came out ok!
Posted by T.L. Merrybard at 21:18